Few people know that the official account of the Twin Towers’ destruction relies entirely on just four journal papers. All four papers were coauthored by Northwestern University engineering professor Zdeněk Bažant, and all four were published in the ASCE’s Journal of Engineering Mechanics between 2002 and 2011 (Bažant submitted the first paper a mere two days after 9/11). 1 2 3 4

This may come as a surprise to many people, since one would assume that the government itself fully investigated the Twin Towers’ destruction and offered a complete theory explaining these catastrophic building failures. But that assumption is wide of the mark.

As it happens, the National Institute of Standards and Technology (NIST) limited the scope of its investigation to “the sequence of events from the instant of aircraft impact to the initiation of collapse.” Stunningly, NIST admitted that it conducted “little analysis of the structural behavior of the tower after the conditions for collapse initiation were reached” and that it was “unable to provide a full explanation of the total collapse.” 5 6

In other words, the government did not explain how the tops of the Twin Towers were able to crush through the enormous steel structures below them “essentially in free fall.”7 The only analysis ever produced in support of this notion was by Bažant and his various coauthors.

This past September, the most recent paper refuting Bažant’s theory was presented by German mathematician and physicist Ansgar Schneider at the annual congress of the International Association for Bridge and Structural Engineering (IABSE) in New York City. Schneider’s paper, “The Structural Dynamics of the World Trade Center Catastrophe,” can now be found in the conference proceedings and is also available for free on arXiv, the e-print server of the Cornell University Library.8 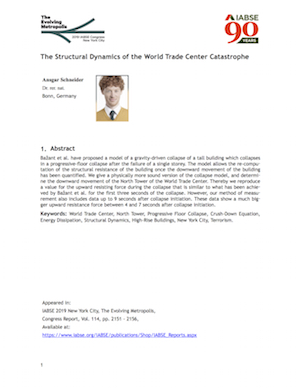 Complementing earlier research, Schneider’s paper offers a new and unique approach to falsifying Bažant’s theory. Previous papers showed that Bažant hugely underestimated the ability of WTC 1’s lower section to resist the fall of the upper section and pointed out that there would have been a large, observable deceleration of the upper section’s downward movement — which there was not — if it had impacted the intact lower section. 9 10 11

Schneider’s approach is to assume that Bažant’s mathematical model of a progressive collapse is valid. Then, by plugging into the model the actual data related to the fall of the upper section, he calculates the upward resistance provided by the lower section.

Perhaps surprisingly, Schneider finds that, from 4.6 seconds until 7.7 seconds into the collapse, the computed upward resistance of the lower section is so great that the collapse would have been arrested if the upward resistance were consistent throughout the vertical length of the building.

Yet Schneider also finds that the upward resistance during the first 4.6 seconds and after 7.7 seconds is almost as low as one-tenth of the possible average upward resistance over the vertical length of the building — specifically, 66 meganewtons versus 500 meganewtons. This finding is consistent with David Chandler’s estimate that, based on the upper section accelerating constantly at 64% of free fall for the first four seconds of the collapse, “close to 90% of the strength of the lower section of the building must have been eliminated.”12

Schneider thus arrives at the question: What mechanism so dramatically reduced the resistance of the building structure at the beginning and the end of the collapse? The obvious answer, in light of all of the evidence ignored by NIST but known to the public for many years, is that explosives and incendiaries were used to destroy the structure.

Regrettably, Schneider was not allowed to give his presentation at the 2019 IABSE Congress in the format he would have hoped. In August, he was denied entry to the United States because his two previous trips to Iran to teach courses and speak at math conferences made him ineligible for the Visa Waiver Program available to most Europeans — and then he was denied a normal visa, despite having an invitation from IABSE.

Unable to attend the conference in person, Schneider recorded a 15-minute presentation that the organizers kindly played at his session. A revised version of that presentation is available below.

Schneider and AE911Truth are grateful to the many people who donated so that he could register for the 2019 IABSE Congress, which enabled him to present this important paper and have it published in the conference proceedings.

[3] Bažant, Zdeněk and Le, Jia-Liang and Greening, Frank and Benson, David: “What Did and Did Not Cause Collapse of World Trade Center Twin Towers in New York?”: Journal of Engineering Mechanics, Vol. 134, No. 10, October 1, 2008.

[10] Szamboti, Anthony and MacQueen, Graeme: “The Missing Jolt: A Simple Refutation of the NIST-Bažant Collapse Hypothesis,” Journal of 9/11 Studies, April 2009.

Architects and Engineers For 9/11 Truth