So by getting the FDA to issue an EUA, which they did on February 27th, Johnson and Johnson can now test their experimental vaccine on the public as part of their Phase 3 trials.

The vaccine is being produced in Belgium, by the same company that in the past produced the anthrax vaccine that destroyed the lives of so many military personnel.

FDA Issues Emergency Use Authorization for Another Experimental COVID-19 Vaccine

The Food and Drug Administration authorized the Janssen Pharmaceuticals/Johnson & Johnson viral vector shot for emergency use on February 27. It has now claimed the life of a promising young professional.

Mr. Benjamin Goodman went to a Walgreens pop-up COVID-19 “vaccine” clinic in Chelsea, New York on Saturday, March 13. He received the experimental Johnson & Johnson viral vector shot, according to his stepmother Pamela Goodman. Benjamin texted his father, Jeff Goodman, and told him he received the shot. The family was not happy to hear the news. Soon thereafter, Benjamin had a severe headache and started feeling ill. He fell asleep, hoping the symptoms would pass after some rest.

Mr. Goodman woke up at 1 a.m. with a high fever and chills. His fiancée, Lindsay Janisse, was awakened to Mr. Goodman having seizures at 4 a.m.. Ms. Janisse called 911 as Mr. Goodman went into cardiac arrest. Paramedics tried, unsuccessfully, to revive him on the scene. Mr. Goodman was rushed to a nearby Mount Sinai Hospital. But he was pronounced dead at 6:05 a.m. Sunday morning, March 14.

His mother did not mince words as to what happened to her son. 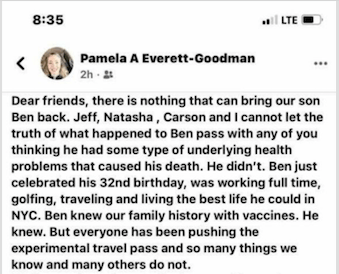 Mr. Goodman was a member of Local One International Alliance of Theatrical Stage Employees. He worked behind-the-scenes on several NBC and CBS shows.

Mr. Goodman was recently accepted into the Michigan State University MBA program, and planned to enroll this fall. He and Lindsay planned to marry on June 25, 2022. A GoFundMe page is collecting donations for funeral and other costs.

Mr. Goodman was no dummy. He was an intelligent young man with a bright future. Many Americans and others around the globe are like Mr. Goodman. But they are constantly bombarded with coordinated, well-structured messaging from mainstream media and big tech companies.

Mr. Goodman even had family members warning him against getting these experimental shots, to no avail. Whether they listen or not, it is your responsibility to at least inform loved ones about the true nature of these shots and the agenda thereof. These shots are tools of genocide. Period. Stay vigilant.

The Johnson & Johnson experimental viral vector shot has claimed another young victim with a promising future.

Ms. Desirée Penrod said on Facebook that she received the “Janssen dose” on or around March 9. Janssen Pharmaceuticals is the drug division of Johnson & Johnson, and developed the JNJ-78436735 viral vector shot.

It is marketed as the one-dose vaccine. The 25-year-old educator said she felt no adverse effects the first day of the shot. But she said the “vaccine is killing me today” on March 10. 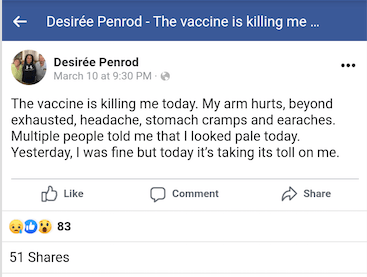 She engaged with several people who commented on her post that day. Ms. Penrod said the shots were offered to her through the Killingly School District in Danielson, Connecticut.

She worked at Killingly Memorial School, which serves grades 2 to 4. Ms. Penrod thanked several people for their concern and told others considering the shot, “no need to be nervous.”