The United States government’s COVID-19 policy response has proven rife with waste, fraud, and abuse at every turn. From $10 million for gender programs in Pakistan being tied to a COVID relief bill to the expanded unemployment system’s runaway corruption by fraudsters, American pandemic governance in 2020 has seemed like a never ending cycle of fiscal irresponsibility.

Yet a new exposé by the New York Times shows that the fraudulent and flawed nature of the US’s COVID response is not an outlier by any stretch.

In its efforts to procure supplies to fight the coronavirus, Britain has awarded thousands of contracts worth billions of dollars. Much of that money has gone to politically connected companies, a New York Times analysis found. https://t.co/5tEO7yZQlY

According to the new investigative reporting, the United Kingdom’s COVID response was riddled with cronyism and corruption. The Times analyzed roughly 1,200 government contracts, worth $22 billion in sum, that were dolled out for Personal Protective Equipment (PPE) and other pandemic-related purchases during the immediate aftermath of the outbreak. At least $11 billion—nearly half—went to suspicious contractors.

The below graphic from the Times sums up this suspect spending well. 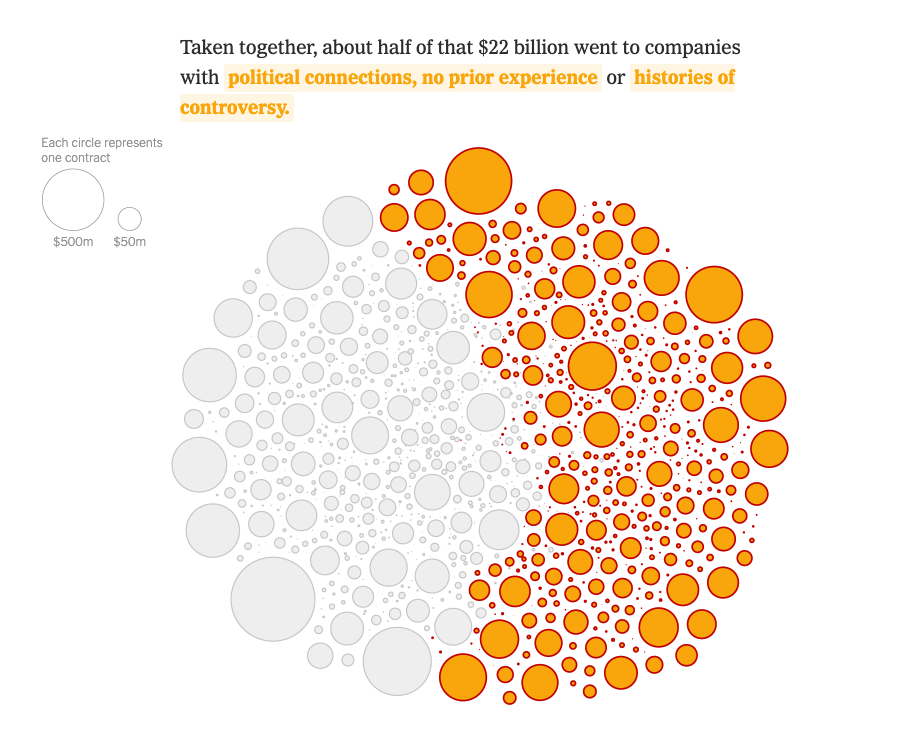 Not all of this was necessarily fraudulent or corrupt—but a lot of it sure must be. And this just represents a small slice of the total waste. Many of the contracts that were doled out actually couldn’t be viewed by the Times because the UK government is eschewing normal transparency requirements.

The details get even worse.

House of Lords member Paul Deighton was put in charge of PPE and “helped the government award billions of dollars in contracts—including hundreds of millions to several companies where he has financial interests or personal connections,” the Times reports. The government also created a “VIP lane” that allowed companies recommended by government officials to get fast-tracked contracts that were 10 times more likely to be approved.

Become an Activist Post Patron for just $1 per month at Patreon.

The Times notes that “there is no evidence to suggest that government officials were engaged in illegal conduct… but there is ample evidence of cronyism, waste and poor due diligence.” This corrupt government approach stands in stark contrast to how goods are distributed by the market.

In a free market, millions of customers make buying decisions based on their personal appraisal of costs and benefits. So, the overall market outcome is determined by widely dispersed decision-making. This makes it much harder for any one corporation or special interest group to rig a sweetheart deal.

Government officials, however, are not spending their own money, nor are they spending it on themselves. This means that their decisions regarding who gets what are less driven by economic factors and more driven by political factors. What’s more, large government contracts are often determined by a relatively small number of people relative to the free market.

Together, these conditions make corruption and favoritism, also known as cronyism, inevitable.

“Cronyism is the substitution of political influence for free markets,” Mercatus Center economist David R. Henderson explains. “It comes about when government has a lot of power over private-sector decisions and when the government officials in power have great discretion over how to use it.”

“The more power the government has over the economy, the more allocation of resources will depend on political connections,” he concludes. “The way to eliminate cronyism is to have free markets and little government control.”

As we can see, the British government’s horrific misuse of taxpayer funds is not a one-off incident caused by particularly bad actors or some especially corrupt group of politicians. Rather, it’s just another example of the endemic favoritism and waste that inevitably corrupts all government spending. The reality is that big government initiatives will always end up funnelling money to the well-off and well-connected. And that’s a lesson worth remembering long after the COVID-19 pandemic fades.

Brad Polumbo (@Brad_Polumbo) is a libertarian-conservative journalist and Opinion Editor at the Foundation for Economic Education.