The CDC announced this week that deaths reported to the Vaccine Adverse Event Reporting System (VAERS), a U.S. Government funded database that tracks injuries and deaths caused by vaccines, following experimental COVID injections, have now reached 3,486 deaths since December of 2020, when the Pfizer and Moderna mRNA COVID shots were given emergency use authorization (EUA) by the FDA.

To get a perspective on the magnitude of deaths following COVID shots that are being reported to the CDC, there were only 3,445 deaths reported to the CDC following all vaccines from 1/1/2005 through 11/30/2020, the 15-year period prior to the FDA issuing emergency use authorizations for experimental COVID injections in December of 2020. 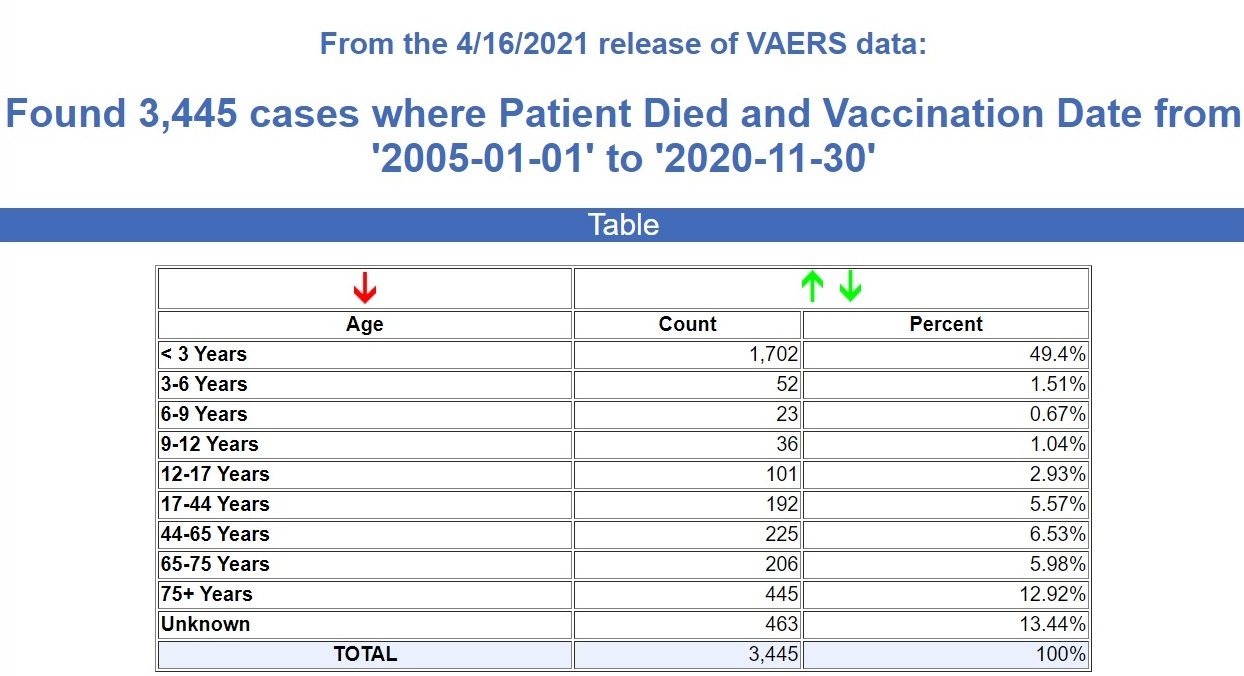 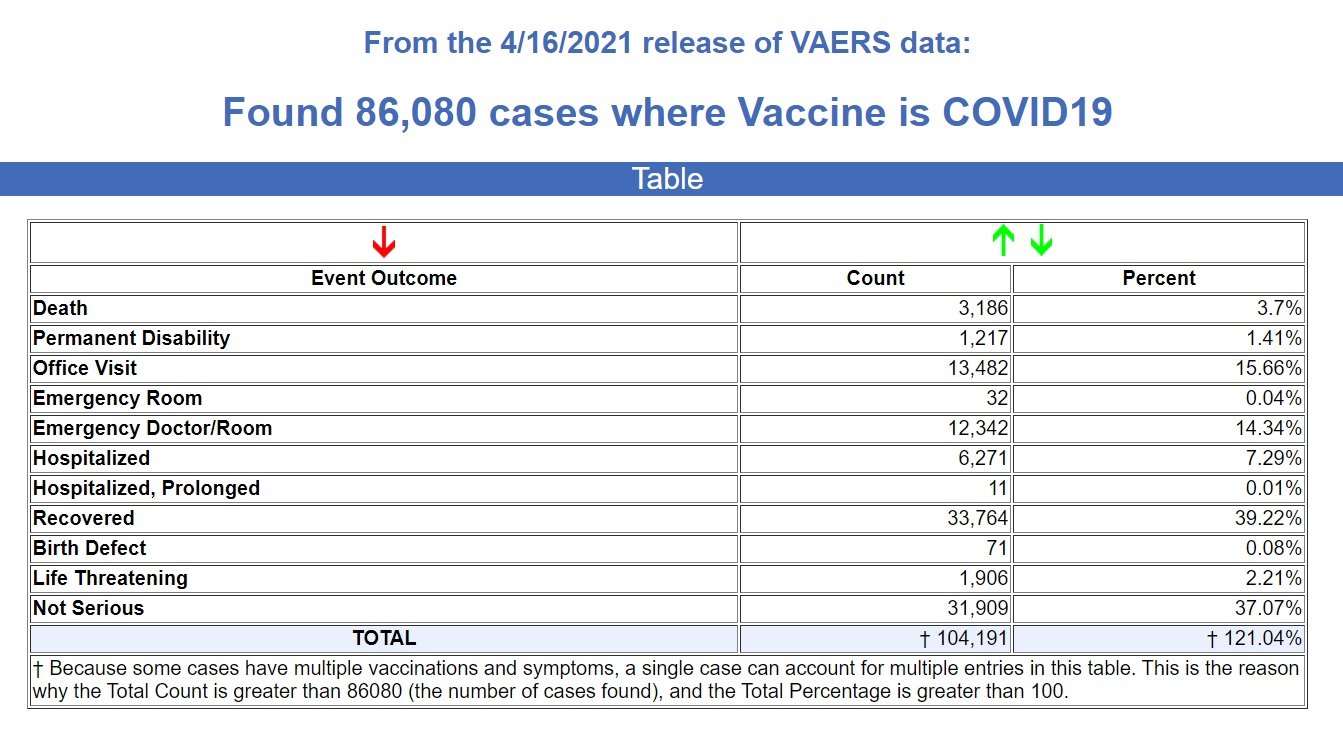 The breakdown of deaths per EUA injection is as follows.

According to the CDC’s COVID Vaccine Tracker, the latest statistics on how many doses of each COVID shot have been injected into the population is as follows.

The J&J Janssen shot has the highest percentage of recorded deaths, with Moderna second.

The Janssen shot is currently paused by the FDA due to reports of “rare” blood clots. According to the CDC, these reports only exist with 8 people, all women.

However, the specific cases of blood clots is very narrowly defined by the FDA and CDC, looking only for “cerebral venous sinus thrombosis combined with thrombocytopenia.” (Blood clots in the brain combined with low blood platelets.)

But many other kinds of blood clots following injections have also been reported, many of them fatal, besides just “cerebral venous sinus thrombosis.”

If we search for deaths due to any kind of “thrombosis,” the numbers go up. Here are the search results for “death” and all cases of “thrombosis” (blood clots.)

Clearly deaths associated with blood clots are being reported with all three EUA shots, but the percentage of shots administered along with deaths and blood clots is considerably higher with the J&J shot.

One other thing to note is the age range these deaths and blood clots are happening with each shot.

With the 27 deaths with blood clots among the Pfizer patients, only 1 occurred below the age of 65.

With the 19 deaths with blood clots among the Moderna patients, 5 occurred below the age of 65.

So the J&J shot is affecting young people, who have little to no risk of dying from COVID-19, far more than the other two shots.

And yet news reports today are stating that the CDC and FDA are getting ready to resume the J&J shots. (Source.)

The decision of whether or not to continue allowing emergency use authorization for the J&J shot, or either of the other two shots, is largely made by just a select few doctors and scientists, all employed by the U.S. Government and with strong ties to the pharmaceutical industry.

Other doctors and scientists who are not employed by a government or a pharmaceutical company that produces and sells vaccines, strongly disagree with the government health bureaucrats, and we have featured many of them here at Health Impact News.

One of the doctors who actually did get an interview in the corporate media is Dr. Hooman Noorchashm, a Harvard trained physician and scientist who was interviewed by Tucker Carlson on Fox News recently.

He stated that he does not know why the FDA and CDC focused on just this specific cluster of blood clots in the J&J experimental COVID shot, because the issue of dangerous blood clots concerns all three EUA COVID shots right now. He was glad the FDA took at least the one shot off the market (although it looks like it is coming back soon).

The interview is still on YouTube for now. (Let us know if it disappears.)

Not only is there disagreement over whether or not these experimental injections are safe or effective, many are now claiming that these shots are purposely designed to infect and kill people as part of a global plan to reduce the world’s population.

The fact that very well-known scientists and doctors are saying this, such as Dr. Michael Yeadon, the former Vice President and Chief Scientist for Allergy and Respiratory at Pfizer, should be headline news, even if their views are not widely accepted by others.

But instead, they are attacked and censored from the corporate media which is mainly funded by Big Pharma and does not do investigative journalism at all when it comes to vaccines, but simply act as marketing agencies for Big Pharma.

COVID-19 RNA Based Vaccines and the Risk of Prion Disease

There is an old saying in medicine that “the cure may be worse than the disease.” The phrase can be applied to vaccines. In  the current paper the concern is raised that the RNA based COVID vaccines have the potential to cause more disease than the epidemic of COVID-19.

This concern originates due to potential for misuse of research data on the mechanisms by which certain RNA binding proteins like TDP-43, FUS and others can be activated to form disease causing prions.

The fact that this research, which could be used for bioweapons development, is funded by private organizations including the Bill and Melinda Gates Foundation, and Ellison Medical Foundation [2] without national/international oversight is also a concern. (Full study.)

As mentioned at the beginning of this article, there are now more recorded deaths following the experimental COVID shots during the first four months in the market, then deaths recorded following all vaccines for the past 15 years!

And yet, the CDC’s official position is still:

A review of available clinical information including death certificates, autopsy, and medical records revealed no evidence that vaccination contributed to patient deaths. (Emphasis theirs. Source.)

For someone who objectively observes the data, which now includes statements submitted to the corporate media by the CDC explaining that thousands of people who are fully vaccinated are still coming down with COVID infections and dying, it obviously takes a LOT more faith to believe that these injections are for our benefit, than it does to believe these shots only benefit Big Pharma and can cause serious harm and injury, and should be avoided completely.

When more people among the public begin to realize that there are evil motives behind these experimental injections, will the politicians and drug company directors be held accountable for mass murder, as the German doctors were at the Nuremburg trials?

Most of those doctors were executed after being convicted at the trials, and if the same moral and legal principles still apply today, then shouldn’t the same thing happen?

For that to happen, however, Americans need to regain control of the judicial system, a topic of a future article that I hope to publish soon.

MASS MURDER: 3,486 DEATHS in the U.S. Following COVID Injections in 4 Months: More Vaccine Deaths Recorded Than the Past 15 Years COMBINED 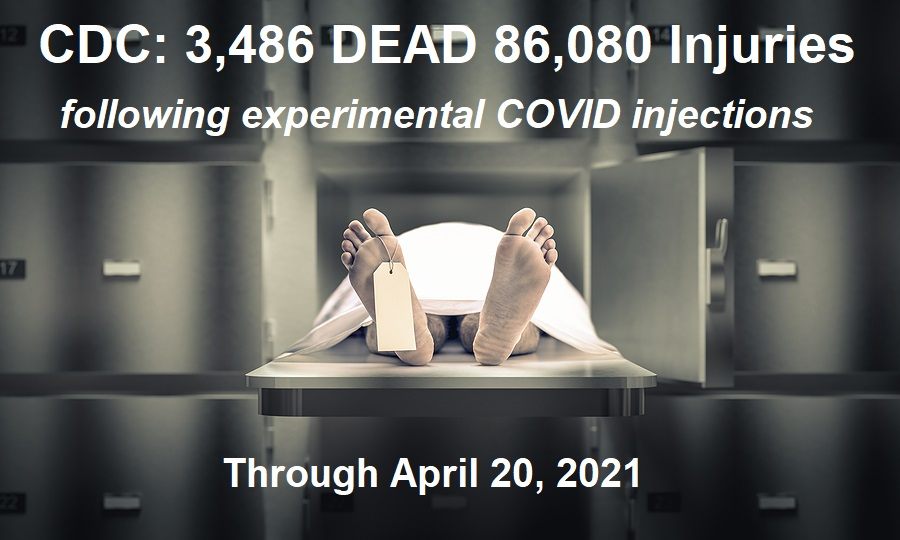