They were among the few individuals we know of to be arrested on 9/11. Five men were pulled over in a white Chevrolet van and taken into custody on the afternoon of September 11, 2001, after they were seen celebrating the World Trade Center attacks from a parking lot across the Hudson River in New Jersey.

The FBI had alerted local police departments to be on the lookout for the van, which was pulled over in East Rutherford, N.J., by Bergen County police. The van was searched by a bomb-sniffing dog, yielding a positive test for the presence of explosive traces, and samples were taken for testing, but the public has never been told whether actual explosive residues were found.

The men were held for 71 days, according to ABC News, before they were deported to their home country of Israel without being charged. Much of the findings of the FBI’s investigation were redacted and have yet to be released to the public.

Though the story received considerable news coverage, neither the FBI nor the U.S. Department of Justice has ever adequately explained to the public why the five men were released without any criminal charges being filed. The 9/11 Commission then failed to consider any of the evidence developed during the FBI’s investigation of the five men. 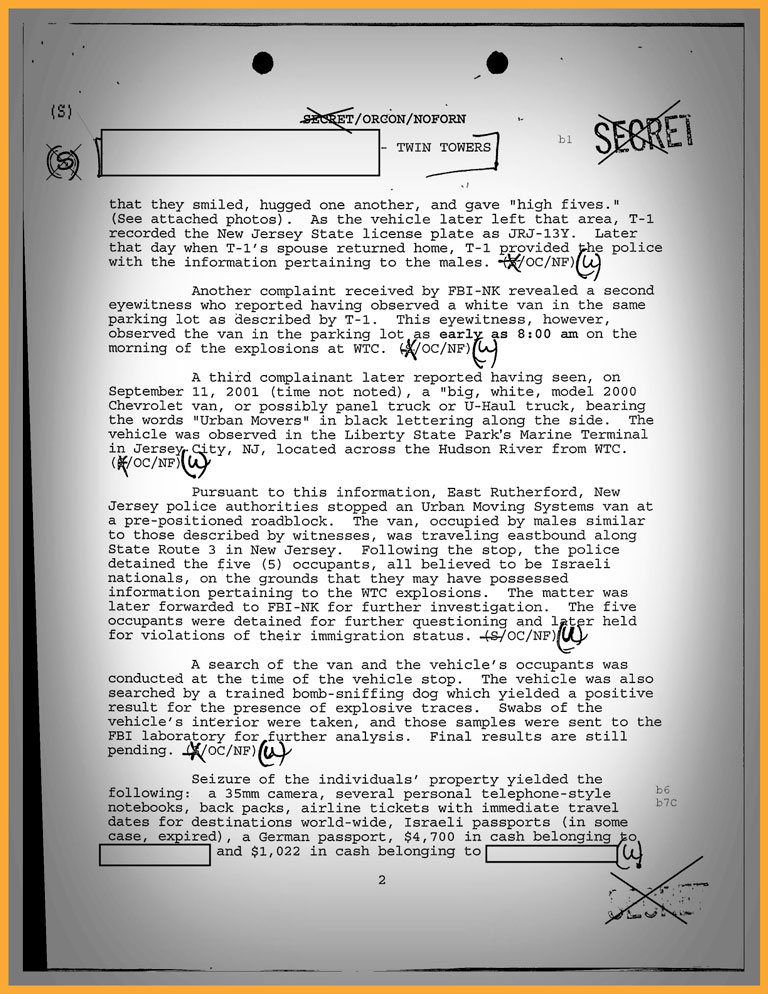 Now, nearly 18 years later, victims’ families and advocates are looking to put an end to the mystery. On March 25 of this year, Architects & Engineers for 9/11 Truth, the Lawyers’ Committee for 9/11 Inquiry, and 9/11 family member Bob McIlvaine filed a lawsuit seeking to force the FBI to assess and report the evidence it gathered during the detention of the five men. The lawsuit also calls for the FBI to address evidence of the World Trade Center’s explosive demolition along with four other areas of unreported 9/11 evidence.

AE911Truth is not attached to the four latter counts of the lawsuit, since they do not relate to our mission of researching and educating the public about the World Trade Center’s explosive demolition. However, we are keenly interested in compelling the FBI to address the evidence regarding the five men arrested in New Jersey Jersey because of the potential that explosive traces were present in the van. Our goal is for the FBI to report the results of any tests for explosive residues that were performed, as such results may shed further light on how the World Trade Center Twin Towers and Building 7 were destroyed.

Other types of evidence could also be relevant. For example, one FBI report indicates that a visitor’s card for WTC 1 (or possibly WTC 7) was found in the white van. According to another FBI report, one of the men stated that he had been told by one of his fellow detainees on the morning of 9/11, “They are taking down the second building,” and that they went to watch from the roof. The man further stated that, at the time, he thought the second tower had been demolished to prevent it from tipping over.

Whatever the FBI found during its investigation of these five men, none of it was included in the 9/11 Commission Report nor in the 2015 report by the 9/11 Review Commission, which was mandated by Congress to conduct an assessment of any evidence known to the FBI that was not considered by the 9/11 Commission. Now we are working to enforce Congress’s mandate because the American people and everyone affected by 9/11 deserve to know the truth.

These men were arrested and held for 71 days. What evidence did the FBI gather about them and why was so much redacted? Why were they deported without being charged? And why have the details been kept secret all these years? With this lawsuit, AE911Truth, the Lawyers’ Committee, and Bob McIlvaine are hoping to finally get answers to all these questions.

The full text of the count in the FBI Lawsuit complaint regarding the arrest and investigation of these five individuals is shown below.

COUNT II.A.: CLAIM FOR DECLARATORY AND INJUNCTIVE RELIEF UNDER THE ADMINISTRATIVE PROCEDURE ACT RELATING TO DEFENDANTS’ FAILURE TO COMPLY WITH THE MANDATE FROM CONGRESS THAT DEFENDANTS PERFORM AN ASSESSMENT OF ANY EVIDENCE KNOWN TO THE FBI THAT WAS NOT CONSIDERED BY THE 9/11 COMMISSION RELATED TO ANY FACTORS THAT CONTRIBUTED IN ANY MANNER TO THE TERRORIST ATTACKS OF SEPTEMBER 11, 2001, SPECIFICALLY REGARDING EVIDENCE REGARDING THE ARREST AND INVESTIGATION OF THE “HIGH-FIVERS” OBSERVED AND SELF-PHOTOGRAPHED CELEBRATING THE ATTACKS ON THE WORLD TRADE CENTER ON 9/11

51. All of the foregoing and subsequent paragraphs are incorporated herein by reference.

52. Another category of evidence related to the 9/11 attacks ignored in the FBI 9/11 Review Commission’s Report is the evidence regarding five individuals who were arrested on 9/11 after witnesses reported that at least three individuals in a white van (license number recorded) were seen celebrating and filming the WTC attack early in the morning of September 11, 2001.

53. The FBI has the names of the five individuals arrested and Plaintiffs’ are in possession of several lengthy redacted investigative reports by the FBI regarding the arrest, interrogation and investigation of these individuals.

55. According to the FBI’s detailed reports, three individuals were witnessed celebrating (the FBI’s term was “high-fiving”) and filming the WTC during the terrorist attacks on the morning of 9/11/01 as early as the first aircraft strike at the WTC, prior to the second tower being struck by an aircraft, according to two separate eye-witnesses (and a third witness who observed their van arrive at the apartment building in question at 8:15 am on 9/11). The FBI held and interviewed the five persons arrested for some time (weeks).

56. These arrestees self-identified as Israelis, who were eventually deported without indictment or prosecution.

57. One of these individuals arrested has been publicly reported to have made a statement after returning to Israel to the effect that these Israelis were sent to the United States to “document the event” (indicating foreknowledge of 9/11).

58. One foreign newspaper reported, based on an interview with a family member of one of the arrestees, that these individuals had videotaped the collapse of both WTC towers.

59. The five specific individuals arrested on 9/11 in this incident were all reported to have worked for a specific moving company at the time, but evidence was obtained by the FBI indicating that the company may not have been a legitimate moving company.

60. Police and FBI investigations related to the arrest of these individuals on 9/11 are reported to have included, in addition to development of the film confiscated from the arrestees and creation of enlarged prints which showed some of the arrestees smiling as they watched one or both of the WTC towers burning, an explosives residue test on a fabric sample from a blanket found in these individuals’ van and swab samples to be tested for explosive residue.

61. The white van driven by these arrestees was searched by a trained bomb-sniffing dog which yielded a positive result for the presence of explosive traces.

62. At least one WTC1 visitors’ card was found in these arrestees’ van. A phone number was also found in the possession of one of the arrestees which corresponded to another moving company that the FBI’s Miami office believed had been used by one of the alleged 9/11 hijackers.

63. One of the arrestees stated to the FBI that one of his coworkers told him on the morning of 9/11 that “they are taking down the second building” and he and a few of his coworkers climbed onto the roof of the company’s building to observe the WTC and take photographs, and at the time he stated he thought the second WTC tower had been demolished intentionally to prevent it from tipping over.

65. The manager of the company that employed the five individuals arrested, whose name is also known by the FBI, apparently fled the country after the arrest of his five employees.

66. Some of the FBI agents who were involved with the detention and interviews of these “high-fivers” were reported to have drawn the conclusion that these arrestees were in some way involved with the 9/11 terror attacks.

67. These arrestees were eventually released and deported, apparently against the better judgment of some of the FBI agents involved in the investigation.

68. The evidence noted above regarding these “high-fivers” was not considered by the original 9/11 Commission, and was not assessed in the later 9/11 Review Commission’s Report.

70. The actions of Defendants challenged in this Count of the Complaint are final agency actions for which there is no other adequate remedy in a court other than via the federal mandamus statute 28 U.S.C. § 1361 (addressed in Count II.B infra).

71. For all the reasons stated herein, Plaintiffs are entitled to declaratory and injunctive relief to remedy Defendants’ failure to comply with their non-discretionary duty imposed by Congress requiring Defendants to have prepared an external independent assessment of any evidence known to the FBI that was not considered by the 9/11 Commission related to any factors that contributed in any manner to the terrorist attacks of September 11, 2001, specifically in regard to the aforementioned evidence of the arrest, interrogation, and investigation of the 9/11 “High-Fivers.”

72. All of the foregoing and subsequent paragraphs are incorporated herein by reference, specifically including the paragraphs in Count II.A.

73. The actions of Defendants challenged in this Count of the Complaint are final agency actions for which there is no other adequate remedy in a court, other than via the APA (addressed in Count II.A. supra).

74. For all the reasons stated herein, Plaintiffs are entitled to injunctive relief via the federal mandamus statute 28 U.S.C. § 1361 to remedy Defendants’ failure to comply with their non-discretionary duty imposed by Congress requiring Defendants to have prepared an external independent assessment of any evidence known to the FBI that was not considered by the 9/11 Commission related to any factors that contributed in any manner to the terrorist attacks of September 11, 2001, specifically in regard to the aforementioned evidence of the arrest, interrogation, and investigation of the 9/11 “High-Fivers.”

The Five Dancing “Israelis” Arrested On 9-11