Architects and Engineers for 9/11 truth

On September 11, 2001, at 5:20 PM, the 47-story World Trade Center Building 7 collapsed into its footprint, falling more than 100 feet at the rate of gravity for 2.5 seconds of its seven-second destruction.

Despite calls for the evidence to be preserved, New York City officials had the building’s debris removed and destroyed in the ensuing weeks and months, preventing a proper forensic investigation from ever taking place. Seven years later, federal investigators concluded that WTC 7 was the first steel-framed high-rise ever to have collapsed solely as a result of normal office fires.

Today, we at Architects & Engineers for 9/11 Truth are pleased to partner with the University of Alaska Fairbanks (UAF) in releasing the draft report of a four-year computer modeling study of WTC 7’s collapse conducted by researchers in the university’s Department of Civil and Environmental Engineering. The UAF WTC 7 report concludes that the collapse of WTC 7 on 9/11 was caused not by fire but rather by the near-simultaneous failure of every column in the building.

Please share as widely as you can and consider a donation.

Following the release of the UAF WTC 7 draft report on September 3, 2019, there will be a two-month public comment period ending on November 1, 2019. The final report will be released later this year.

Commenters are asked to send their comments in an attached PDF or Word document to publiccomment@AE911Truth.org.

All input data, results data, and simulations that were used or generated during this study will be made available here and at http://ine.uaf.edu/wtc7. The research team is currently organizing and uploading all of its data into a format that can be readily downloaded and used. We expect to post the data sometime between September 16 and September 30, 2019.

For anyone intending to download the data, please be advised that there are several hundred gigabytes, so plan your data storage accordingly. 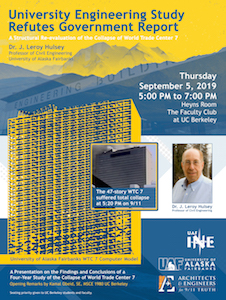 The first presentation was given in UAF’s Schaible Auditorium on September 3, 2019, and is archived at https://media.uaf.edu.

The second presentation was given at the Faculty Club at UC Berkeley on September 5, 2019.