A New Jersey student whose college, the New Jersey Institute of Technology, requires all students to be fully vaccinated in order to attend classes in the fall became ill within hours of receiving the second dose of Moderna’s COVID vaccine. 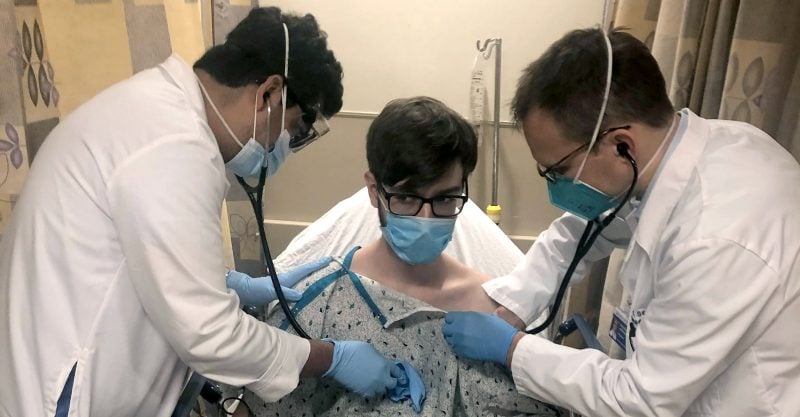 The Defender is experiencing censorship on many social channels. Be sure to stay in touch with the news that matters by subscribing to our top news of the day. It’s free.

A 21-year-old New Jersey student suffered severe heart inflammation after receiving his second dose of Moderna’s COVID vaccine. Justin Harrington, whose school required him to get the vaccine in order to attend classes in the fall, experienced flu-like symptoms followed by heart pain within eight to 12 hours of receiving the vaccine.

In an exclusive interview with The Defender, Justin’s father, Timothy Harrington, said his son felt different after the second shot. “Every time his heart beat it hurt and he felt pressure,” Harrington said. “Then he developed heart pain down both arms.”

Harrington said his son, who has no underlying medical conditions, did not experience heart pain with his first dose of the vaccine.

On May 24, two days after Justin received the second shot, his father took him to the emergency room at Morristown Memorial Hospital because the symptoms had worsened.

“The physicians weren’t connecting it to the vaccine until I informed the doctors my son just got the vaccine, and shared with them the information I had found on myocarditis,” Harrington said. “I didn’t think the doctors were stupid, but physicians sometimes see with blinders on.”

Physicians checked Justin’s blood levels, which showed high protein numbers. Abnormal scans, including an EKG, led to a diagnosis of myocarditis. Justin was hospitalized for three days while doctors attempted to get the condition under control.

Harrington said even though his son has been released, he still has chest pain and his life is not the same.

“He has to wear a heart monitor and take four different medications for six months,” Harrington said. “He has to sleep propped up, can’t exert himself and he’s missing out on one of the most important times of his life.”

Harrington said his son is supposed to be doing internships, “but how can he go out and find a company to work with him when he can’t exert himself? He’s so smart and now he’s side-lined. Doctors want my son to lie around for three to four months.”

As for Justin’s recovery, Harrington said, “He has minor scarring on his heart and doctors hope they caught it early enough that there will be no other issues — but it’s pure conjecture at this point.”

After Justin’s diagnosis, doctors recommended Harrington’s 19-year-old son, who received one dose of the Moderna vaccine, not get the second shot.

However, both sons were told they needed to get vaccinated in order to attend school — despite both previously having had COVID, Harrington said.

As The Defender reported last week, a new preprint study by the Cleveland Clinic found people previously infected with SARS-CoV-2 were less likely to be reinfected than fully vaccinated individuals who never had the virus — suggesting the vaccine is of no benefit to people who already had COVID.

In addition to the vaccine likely providing no benefit to those who already had the virus, studies suggest people who were previously infected with COVID are more at risk of severe adverse reactions.

As The Defender reported earlier this year, some experts say the science to support vaccinating those primed with COVID doesn’t exist and there’s a potential risk of harm, including death, in vaccinating those who’ve already had the disease or who were recently infected.

Still, many colleges and universities — including the New Jersey Institute of Technology (NJIT) where Justin is enrolled — are mandating the vaccines for all students, with few or no exceptions.

“Justin’s a rule follower and he was pressured to get it,” Harrington said.

Harrington said when he called the dean of NJIT prior to his son getting vaccinated and asked why the school is forcing young people who are at little risk of serious illness from COVID to get the vaccine, the dean replied that unless his son had a valid medical or religious exemption, it was a requirement.

“I am not ‘anti-vax,’” Harrington said. “I am ‘anti-forced-vaxxed.’ They’re forcing these kids to get a vaccine even though they’re not affected by COVID or have already had it.”

According to Justin, he reported his myocarditis to the Centers for Disease Control and Prevention’s (CDC) Vaccine Adverse Events Reporting System (VAERS), but no one from the agency followed up.

Justin said he would “absolutely not” recommend anyone get vaccinated, as he does not want this to happen to any of his friends. “I’m not here to bash Moderna, but I wouldn’t take it,” he said.

Harrington said he also knows of a girl who had to have a heart transplant after being vaccinated and believes his son’s condition could have been even more severe if he hadn’t reached him in time.

According to WLWT 5 News, 19-year-old Simone Scott underwent a heart transplant one month after suffering a heart complication from her second dose of Moderna and subsequently passed away.

As recently as last week, Moderna said it has not found a link between its COVID vaccine and cases of a rare heart inflammation condition reported in young people who have received the shot.

The vaccine maker said in a statement it arrived at this conclusion after “carefully reviewing available safety data to date for the Moderna COVID-19 vaccine for cases of myocarditis and/or pericarditis.”

The CDC said during a June 10 meeting of the U.S. Food and Drug Administration’s (FDA) Vaccines and Related Biological Products Advisory Committee the agency had identified 226 reports of heart inflammation that might meet its “working case definition” of myocarditis and pericarditis following the shots, The Defender reported last week.

Moderna said it “will continue to closely monitor these reports and is actively working with public health and regulatory authorities to further assess this issue.”

“We clearly have an imbalance there,” said Dr. Tom Shimabukuro of the CDC’s Immunization Safety Office during the June 10 FDA meeting. The committee met to discuss safety issues surrounding the use of COVID vaccines in children as young as 6 months old.

The CDC has scheduled an emergency meeting of its advisers on June 18 to discuss higher-than-expected reports of heart inflammation following doses of Pfizer and Moderna COVID vaccines.

Children’s Health Defense asks anyone who has experienced an adverse reaction, to any vaccine, to file a report following these three steps.

Megan Redshaw is a freelance reporter for The Defender. She has a background in political science, a law degree and extensive training in natural health.

Sign up for free news and updates from Robert F. Kennedy, Jr. and the Children’s Health Defense. CHD is planning many strategies, including legal, in an effort to defend the health of our children and obtain justice for those already injured. Your support is essential to CHD’s successful mission.