The COVID-19 pandemic has required a rapid public health response on a scale and speed unseen in modern times. Whilst those procuring goods and services have sought to expedite the emergency response, we observe a pattern of behaviour whereby critical safeguards for protecting the public purse have been thrown aside without adequate justification.

Using evidence from these reports and analysis of available data, we identify two key issues concerning procurement practices during the pandemic. We also identify a third, more general issue relating to the mechanisms for ensuring integrity in public office.

From these findings, we propose ten steps that could address some of the concerns raised over the last year, and help avoid similar mistakes being repeated in the future. None of these are particularly costly, with three either complementing or endorsing proposals already included in the UK Government’s Green Paper for reform. If implemented effectively, they have the potential to increase transparency, deliver greater accountability, and reduce the risks associated with contracting, both during a crisis and in normal times.

We hope this provides a critical, yet constructive contribution towards recent debates. Some of what we propose may be uncomfortable for those of which we ask it – subjecting oneself to greater scrutiny is seldom a natural imperative for those in public office – yet these steps are critical to setting the record straight. 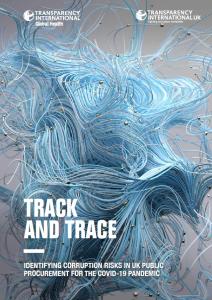 Launched today, Track and Trace is the most comprehensive study to date of public procurement during the pandemic and involved a painstaking review of nearly 1,000 contracts worth a total of £18 billion.

The report details how critical safeguards designed to prevent corruption were suspended without adequate justification. Transparency International UK identify 73 contracts worth more than £3.7 billion, equivalent to 20 percent of COVID-19 contracts between February and November 2020, that raise one or more red flags for possible corruption.

Of particular concern is the ‘VIP’ or ‘high priority’ lane used to fast track offers of PPE from companies referred by MPs, peers and senior officials. Our analysis of the available evidence is consistent with there being systemic bias towards those with connections to the party of government in Westminster, despite continued claims by the Government to the contrary.

The report concludes that poor record keeping combined with opaque, uncompetitive contracting and a suspiciously high number of awards to companies with political connections has undermined public trust and justifiably fuelled criticism of the Government.

Twenty-four PPE contracts worth £1.6 billion were awarded to those with known political connections to Conservative Party.

Between February and November 2020, 98.9 percent of COVID-19 related contracts by value (£17.8 billion) were awarded without any form of competition, many without adequate justification.

Fourteen companies incorporated in 2020 received contracts worth more than £620 million, of which 13 contracts totalling £255 million went to 10 firms that were less than 60 days old.

Whitehall has faced understandable resource challenges, but our study catalogues the woefully inadequate arrangements for enabling scrutiny over the use of taxpayers’ money.

“There are now very serious questions for the Government to answer with more than a fifth of the money spent on purchases in response to the pandemic raising red flags. The Government’s approach to procurement during this critical period has already dented public confidence at a time when the trust of its citizens is most needed. We must now have full accountability for the eyewatering amounts of taxpayers’ money spent on the response – with the award for each of the 73 contracts we highlight in our report subject to a thorough audit.

“The frequency with which COVID-related contracts were awarded to those with political connections is deeply concerning and is at such a level that it cannot be explained away as coincidence. Given it appears only a select group knew about the ‘VIP’ lane, with those politicians in the know confined to one side of the House, it is our conclusion that the system for handling PPE offers was preloaded with bias. Months after the VIP lane came to light, the Government has still failed to answer basic questions about its functioning and existence.

“We welcome the steps towards greater procurement transparency in the Government’s Green Paper. However, this cannot be used to brush the urgent need for transparency and accountability for decisions taken over the last year under the carpet. With more spent on PPE than the annual budget of the Home Office, the public have a right to know if their money was spent wisely and properly.”

Transparency International UK makes a series of recommendations that would address concerns of cronyism, restore confidence in public contracting and ultimately help secure the long-term success of the UK’s pandemic response. They include:

The sample period for this research covers contracts awarded between February 1 and November 30, 2020.

Of this, just under £18 billion (7.8 percent) related to pandemic response, involving over 100 public sector bodies and 998 contract awards.

The last date we extracted data from TED was 30 November 2020. However, we reference two additional COVID-19 contracts in the report published after 30 November due to their public prominence.

During a National Audit Office investigation into COVID-19 procurement, published in November 2020, the UK Government acknowledged there was a ‘VIP’ high-priority lane for triaging potential suppliers of PPE equipment. During the early stages of the pandemic, this lane received over 15,000 offers of PPE supplies.

In total, the UK Government accepted ten per cent of offers that passed through the VIP lane (47 out of 493) compared to 0.7 per cent (104 out of 14,892) of those going through the normal channels.

Our research found evidence that the overwhelming majority of bids put into this ‘VIP’ lane had links to the party of government in Westminster. Therefore, the bias existed before any standard procurement checks took place and irrespective of ministerial distance from contract decision making.