NOTE: before getting to the heart of the biggest headline, I just want to note that when Finance Minister Chrystia Freeland speaks in French, she says things she never repeats in English.  The French language Canadian audience hear a much stronger declaration in the framework of government action, including language that says, “The Canadian government, and the heart of Canadian democracy is directly being attacked by foreign groups.”  Freeland does not say this in English, only in her French delivery.

During her prepared remarks today, a very happy Canadian Finance Minister declared that federal law enforcement (RCMP) has begun working with financial institutions to de-bank Canadian citizens, cancel insurance policies, remove access to credit cards, cancel mortgages and freeze the assets of Canadian citizens.  When you watch the segment highlighted below, keep in mind the RCMP is the Canadian equivalent of the FBI.

When asked specifically about Canadian citizens who donated to crowdfunding platforms GiveSendGo and GoFundMe, and whether those people will be targeted under the Emergency Act, Minister Freeland giddily affirmed those people are the actual targets, and the de-banking of those individuals is underway.  This includes the seizure of digital currency and crypto-wallets.

In the earlier part of her remarks, Freeland noted that social media posts (Facebook, Twitter, Instagram, TikTok, etc.) are being used as evidence against the targeted names identified within the donor lists.  Tech platforms have provided people to work with Canadian federal officials, as they identify and cross-reference the donor files to their social media identities.  WATCH:

Again, not a word about the coronavirus, covid mandates, or government action related to the pandemic.  The totality of the Trudeau administration effort is in weaponizing a narrative of protests against the government to achieve a raw and brutal power grab.   The Emergency Act is being used as a tool for political power.

Quite remarkable how openly they admit what they are doing. 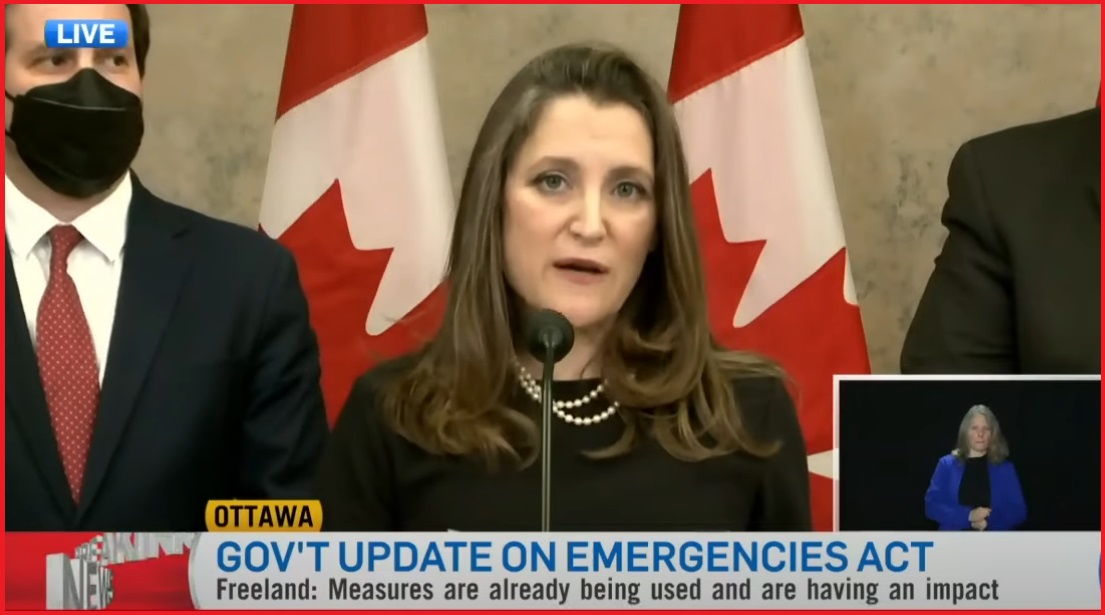