(LifeSiteNews) – A particularly horrifying Instagram post a few days ago shows our new global reality. It’s a video taken on a crowded street somewhere in Israel where a young person – it looks like a girl in her teens or perhaps early 20s – has collapsed. Her eyes are closed, her head is listing back and to one side, and she looks completely unresponsive as she’s wheeled by paramedics through the bustling foot traffic. Off camera, a man in the crowd begins shouting: “This is Pfizer! This is Pfizer! This is Pfizer!”

Welcome the “New Normal.” If you think this is an overstatement, take a look at a sampling of dozens of stories that made headlines recently:

There are good odds every one of these youths were jabbed. Just ask Gov. Gavin Newsom if children are being forced to be vaccinated to attend school in California. Or ask Kyrie Irving how much pressure is put on young athletes to get injected to be allowed to play. It’s a good bet they all received at least one dose of the experimental COVID-19 shots because the odds of having a heart attack as a child, or a brain bleed, are minuscule – unless of course, you’ve had a “clot shot” as they’ve come to be called.

These youths are tragic statistics in a global phenomenon that is just beginning to show. It’s emerging in India, for example, where the Hindu Times reports Heart attacks among youngsters on the rise. The article refers to celebrity Puneeth Rajkumar, who died five days ago, of a heart attack at age 46. His first warning was sudden chest pain at the gym. No media mention that the “yoga practitioner and strong advocate of healthy living” got his first experimental COVID shot in April, but he tweeted it.

It’s happening in Canada, where the public health agency reports 970 confirmed cases of myocarditis, an inflammatory heart condition that can lead to heart attack, among the vaccinated with a median age of 27 – at a rate significantly higher than normal.

Recent mortality data for England and Wales is equally “baffling” – but only if you are a public health expert who is unable to consider the recent injection of a powerfully immune-modulating novel-platform, experimental gene-modifying spike-producing vaccine in your analysis. Data from the Office for National Statistics shows that young people, particularly in the 15 to 19 age group, are dying in significantly greater numbers recently, with excess deaths between 16% and 47% above expected levels between May and September, 2021 – and unaccounted for by COVID-19.

For those worried about COVID overwhelming hospital systems, check out the data from the U.S. Vaccine Adverse Event Reporting System (VAERS). In children ages six to 17 years of age, (mostly only in 12- to 17-year-olds since five-year-olds will just start getting the shots this week), there have been 26,608 reports of adverse events following COVID vaccination to October 22. These are not just a “sore arm at the injection site” and “mild fevers” as CNN would suggest. They include 1,689 minors who required hospitalization (for 754 incidents of life-threatening myocarditis and pericarditis, for example – in teenagers!). They include 321 additional youngsters who were classified as experiencing life-threatening events (such as anaphylactic shock), and 163 youths left with permanent (that means lifelong and life-altering) disabilities such as paralysis and neurological disorders. They also include 38 children who died after getting one of Big Pharma’s “novel,” rushed, experimental injections.

In 18 months since public health experts began “responding” to the coronavirus, 542 children under age 18 have died of COVID-19 in the United States (which is about 30 children per month). Most of them had severe underlying sicknesses.

In six months of vaccinating just a portion of kids (over age 12) against COVID, there are 754 new cases of heart disease alone and more than 200 children permanently disabled and dead. Not to mention the thousands of other cases. Who is doing the math?

One childhood death of flu in 2020

The same people calculating the risk/benefit ratio of COVID shots for children and young adults are the ones stoking fear about COVID in kids. In reality, usually, each year, more than 100 children die of influenza. As with COVID, these are mostly very premature infants or severely sick children before they were infected.  During the six month 2017-2018 flu season, for example, 188 children died of flu. Compared to COVID’s 30 per month, that’s 31 children per month who died of influenza in 2018 which the Centers for Disease Control and Prevention (CDC) said was likely “closer to 600.” Remarkably, the CDC received a report of only one pediatric flu death during the pandemic 2020-21 flu season. It’s as if flu suddenly vanished, and a “novel” respiratory virus which looks just like it took its place, except suddenly public health experts and politicians have sensationalized it and made it their priority agenda. 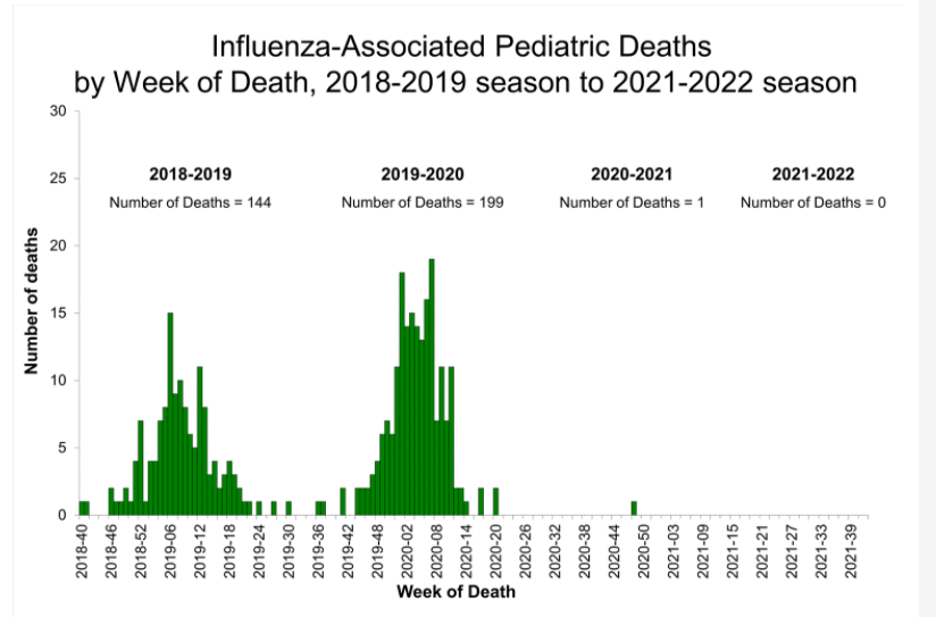 Add in vaccine injury data for older teens and young adults and the picture becomes even more insane – and scarier. For those youths between ages 18 and 29, VAERS data states that there have been:

Talk about overwhelming the health system.

For those who object to the use of VAERS data as an indicator, it must be said that reports do not prove the vaccine was the cause of the reported illness. But it also has to be said that VAERS data have been clearly demonstrated to capture as little as one in 100 vaccine side-effects that should be reported, meaning VAERS reports are only the tip of the iceberg of things going wrong. Add a zero or two to the numbers and you’re closer to the truth.

What’s not being reported is that while the COVID death toll has been largely confined to the elderly, with the vast majority of deaths in those over age 70, it’s the young who are bearing the brunt of vaccine injury. According to VigiAccess, the adverse event database for the World Health Organization, 41% of the more than 2.4 million vaccine injuries reported so far are among those under age 44, and just six percent are among people over age 75. 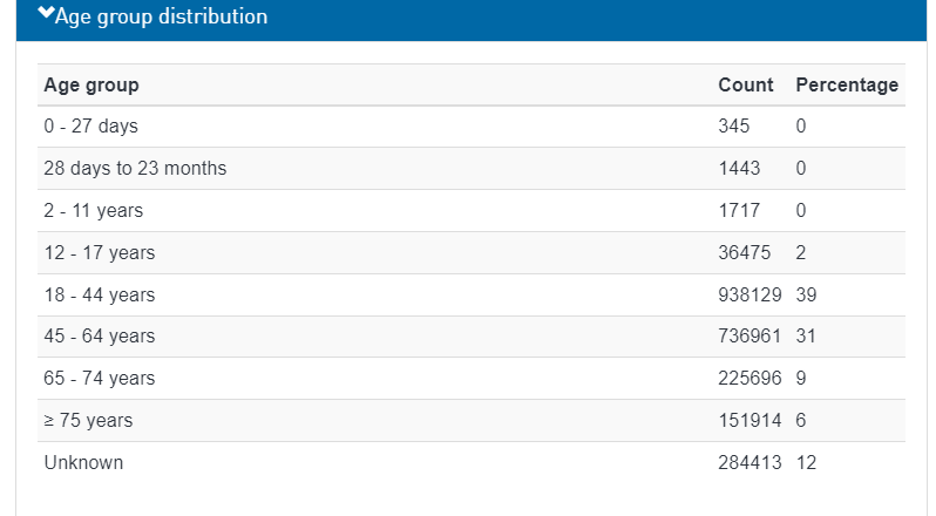 It may be that many abnormal signals in the young are dismissed in the old, because of their age. VAERS reports 1,925 cases of myocarditis/pericarditis, which usually requires hospitalization and a regime of drugs for months, in those 18 to 29, and 754 in the smaller group of children aged 12 to 17. The signal for this problem was recognized relatively early because it is so rare for young people to have myocarditis or heart attacks out of the blue. But these young people are likely just canaries in a coal mine for a problem that does affect older people, too. The total current myocarditis/pericarditis COVID vaccine toll on VAERS is 9,813 (7,256 for Pfizer, 2,368 for Moderna, and 189 for Johnson & Johnson’s shot – so it’s hard to figure why the FDA is only reviewing Moderna’s shot for its myocarditis risk).

Add a zero to that for a conservative estimate of the true problem and you have over 90,000 cases of inflammatory heart disease from the vaccine.

What also has to be factored into the picture is that these “cases” are real young people whose lives have been completely derailed and who most likely will not be recovered as quickly as they would have bounced back if they contracted the coronavirus.

‘I’m struggling with my new normal’

Cienna Knowles is a case in point. The 19-year-old posted from her hospital bed in Australia that she had taken Pfizer’s mRNA jab on October 21, because she was “pretty much told no jab, no job, can’t compete with my horses, can’t go anywhere.”

“You’re selfish if you don’t get it, just get it” is the message Knowles and millions of teens across the globe get daily from the pharmacy-owned media.

But now the girl who was trying to do the “right thing” and had never spent a day in hospital in her life, has been diagnosed with blood clots in her lungs, stomach, and legs. Her lucrative prospects in professional horse riding are gone for now.

Knowles said there are other symptoms that she doesn’t want to share publicly. “I’m struggling to come to the terms with what has been taken away from me… my new normal.”

Varsity basketball player Everest Romney, 17, got his first Pfizer shot on April 21 in order to keep playing. His headaches started the next day, and doctors repeatedly dismissed his problems until nine days later when his mother insisted his head be checked and they discovered blood clots in his brain and in his jugular vein.

Daniel Shep and his girlfriend both wound up with heart conditions after taking COVID vaccines in September. Shep developed severe chest pain three weeks after his second dose and wound up hospitalized with life-threatening pericarditis and he’s been told not to exercise for six to 12 months and been handed a bag of pharmaceuticals to take. His girlfriend was diagnosed with myocarditis. After calling around to warn his friends, Shep’s cousin was diagnosed with pericarditis as well. What are the odds?

Hearing these stories and reading through the thousands of VAERS reports of young people is harrowing, and should be a mandatory exercise for mainstream media reporters, included in their daily COVID updates, and for public health “experts” who are promoting this pandemic of vaccine injury in the young. They should be viewed by every politician and school administrator pushing experimental pharmaceuticals on children in schools, by every Baby Boomer who begrudges kids spreading infections that their vaccine won’t protect them from and that they can transmit themselves, and by every parent eager to buy their children Big Pharma’s promise to return their lives to normal.

What is to come?

Recently, a four- and five-year-old brother and sister were accidentally vaccinated with a Pfizer COVID shot at a Walgreen’s pharmacy in Indiana. Each received an adult dose of COVID shot instead of flu shot. Four-year-old Lukas started feeling sick before he even got home. He and his sister Sophia developed a racing heart and elevated blood pressure respectively, among other symptoms, and they are now in the care of a pediatric cardiologist. Big dose or not, this incident does not bode well for the immune systems and health of a generation of children about to be sacrificed to a large-scale pharmaceutical industry experiment.

With the vaccine rollout to children as young as five set to start, it’s hard not to envision a future of rashes of VAERS reports, case studies, and news accounts about little ones – five, six, and seven years old – suddenly having heart attacks on playgrounds, and dropping with brain bleeds and thromboses. I wonder if the public which has been imprisoned by the Fauci COVID narrative and his pharmaceutical “solution” will then begin to realize that life with COVID vaccines will never be anything like normal.